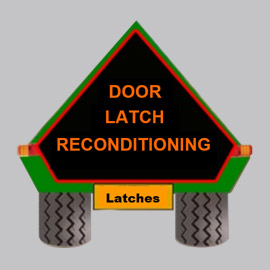 If yours cannot be reconditioned then a new one would be required.

Returns are by express post and are included in the price.

Note: not all makes and models of vehicles have all of the above computers/functions/features.

This latch is the first style with both the 6-way and 1-way connector molded into the housing.

This latch is the middle style with the 6-way and 1-way connector at the end of a short wiring loom.

As you can see from the above photos there are three different models of latches and the changeover VINs for each. Please remove the door trim, peel back the protective sheet, and physically check the latch and connectors as some may have been replaced previously, and the connectors modified or eliminated (wires soldered together etc).

If the connectors have been changed or the wires soldered please remove the failed door latch and send it to me for reconditioning, as no exchange is possible.

I have a very limited stock of Right Hand Drive door latches, and no Left Hand Drive door latches. So in order to prevent this (above) the same thing from happening to me, I will be asking you to remove and send me your failed door latch. RHD latches - Upon receipt I will test and assess your latch and if deemed repairable I will dispatch a reconditioned latch to you. LHD latches - Will have to be reconditioned and returned - hopefully, I will eventually get a supply of failed LHD latches and once reconditioned be able to supply them on a similar exchange system.

The door cannot be opened (Latch jammed) - First way to try is to thump the outside of the door edge (where the door metal is thickest and at the height where the latch is located behind) with a rubber mallet covered in several layers of cloth while simultaneously unlocking (by turning the key or pressing the unlock button on the remote). The other is to forcibly open a front door by smashing into the top of the door latch, removing the spring, and manually operating the latching arm. (Instructions - click on the link above) After you have opened the door please remove and send me the damaged door latch and spring etc, as I would like to see if I could resurrect it back into a working condition for you.

Failures: Most of the door latches fail due to their microswitches becoming intermittent. A few have lock/unlock motor failures. This can be observed with the doors locking and unlocking without command, another problem is the EKA code cannot be input, also a 'door open' is registered when the door is closed.

Reconditioning: All microswitches are replaced depending on which latch(s) have failed - three in the driver's door, two in the passengers door and one each in the rear doors.

Lock/unlock motors are inspected and tested - if worn or not working - they will be replaced.

Super lock motors are not tested or inspected, as I discourage their use. I have had several fails and a failure in the super lock position means the door latch has to be smashed to be able to open the door.

Door latch will not release