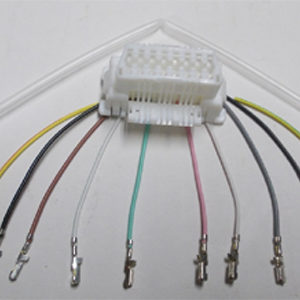 Has a corroded or damaged data connector stopped diagnostic communication?

Order - DATA - A new data connector supplied with ten new terminals with wires crimped onto them.

Preparation - These instructions are for the P-38 Range Rover – other vehicles will be similar, perhaps with fewer terminals in their data connector.

Caution – the wire in chamber 16 (Brown) has battery voltage on it at all times.  Turn the ignition OFF and remove the Fuse (Engine Bay Fuse Box #33 - 5 amp).

First - Identify which is the most corroded terminal and cut it off right at the terminal end of the wire.  Strip about 6 mm of insulation and inspect the wire – it should be clean and bright.  If the wire shows any signs of corrosion cut off a short length of the wire from that end and again strip6mm.  Continue cutting and stripping short lengths until you get to clean and bright wire.

When you have clean wire, you will then need to check that you will have enough usable length to refit the connector when you are finished.  If you have cut off too much length to get to a clean section of the wire you will have to extend the wire(s) by soldering on a short length of suitable wire.

Cut the supplied heat shrink into 10 pieces (the same number as there will be joins to insulate).  Place one (or two if the wire was shortened too much and had to be extended) piece onto each of the wires

Select a wire and strip about 6mm of insulation from the end of it.  Solder the two bare wire ends together and when cool slip the heat shrink over the join and fit the terminal into the appropriate chamber of the new Data Connector terminal block.  Repeat the process with each wire one at a time until all the new wires and terminals are in the correct chambers of the new Data Connector terminal block.

Position each of the pieces of heat shrink over its corresponding bare wire join and apply hot air from a heat gun to shrink it in place to insulate it from the other joins.

Fit the new connector into its original position and replace the fuse.  Diagnostic equipment will be once more able to communicate with your vehicle.

Note: the terminals will only be able to be fitted or removed from the Data Connector terminal block when the side flaps are open – this being one of the two anti-backout features to prevent the terminals from being displaced, to the rear, when the diagnostic plug is connected.   If you do have to remove a fitted terminal, you will have to open the side flap and put a tiny flat blade jewelers screwdriver into the front of the chamber and slightly lift the second of the anti-backout tabs to unlock that terminal.  Have a look and probe into an empty chamber to see what the tab looks like and how it works.