The PulseBusta Euro is designed for use by all 12 volt negative earth towing vehicles (known to LAB Electronics at the time of writing) that have been built to European lighting regulations and are towing trailers which have two tail/licence plate lighting circuits and require monitoring of the trailer’s turn signal LEDs.  It will provide the vehicle with trailer recognition and when required, stop the trailer’s park, brake and turn signal LEDs from blinking.

PulseBusta Euro is not to be fitted to the towing vehicle, as that vehicle will always (falsely) recognise that a trailer is connected.

PulseBusta Euro can get very HOT when in operation.  Do not restrict ventilation to the PulseBusta nor place it on/near plastic or any other heat sensitive materials.

Carefully read the instructions all the way through.  If you feel that you are unable to perform any of the operations, please seek the help of someone who can.  Refer to the ‘You will need’ list near the end and gather all the tools and materials to complete the installation before you proceed.

PulseBusta Euro has a 600mm long (2ft) 7-core cable rated at 10 amps per wire.  It is supplied without trailer connectors so please obtain the type of trailer connectors that you need to make PulseBusta Euro it into an in-line adaptor.  Locally obtained connectors may have different uses and different wire colours indicated for their individual terminals.  When there is a conflict with the PulseBusta Euro wiring, follow the suggestions for the use of the connector terminals, as it will make troubleshooting any faults, at a later time, much easier.  Copy the plug and socket wiring page at the end.  Identify the uses and colours of the wires on your trailer and write them down in the space provided on the plug and socket wiring page.

PulseBusta Euro is internally connected to the trailer’s LEDs using this wiring colour scheme - yellow (left turn), green (right turn), red (brake light), brown (right park and license plate light), black (left park and license plate light), blue (ignition on power) and white (earth) wires.  The blue wire requires ignition on power to operate the monitoring circuits for the turn signal LEDs.  If you are using a 13-pin European trailer plug, you can connect the blue wire to pin #10.  If you are using the two large 7 pin round connectors you will have to connect the blue wire to Pin #6 on the socket with the white cover or rewire the vehicle to put the ignition on circuit in the large 7 pin round with the black cover.  Each of the LED driver circuits is capable of driving up to 4 amps of LED current.  Do not connect any lamps (light bulbs) to the LED driver circuits on the trailer.  The labels on PulseBusta Euro are marked VEHICLE on one end and TRAILER on the other end.  The plug that fits into the socket on your vehicle goes on the cable from the VEHICLE end and the socket that fits the plug on your trailer goes on the cable from the TRAILER end.  Following the fitting instructions and the “use” information for your chosen connectors fit them to the PulseBusta Euro cable ends.  At the connection points you will need to remove from both cable ends the minimum amount of outer sheath that is required to make all of the wiring connections.

Testing the operation of the trailer LEDs

With the vehicle ignition and lights switched off, connect the trailer to the vehicle.  Switch the ignition on and check that any trailer LEDs that were previously blinking have stopped and the trailer telltale does now operate with the turn and hazard signals.  Start the engine, switch the park lights on and operate the foot brake to check the operation of those LEDs and check that there are no lamp failure warnings.  Refer to last page if there are.

Sealing the cable ends after testing

All PulseBusta Euro cable ends are sealed internally during manufacture to prevent liquid and dust entry.  As an extra precaution, the ends of the 7-core cable inside the connectors should also be sealed.  After you have tested the operation, please apply a small amount of silicone sealant or liquid electrical tape to the open end of the outer sheath, around and in between the individual wires using a small screwdriver (or similar tool) to push the sealant into the crevices if required.  Before the connector covers are fitted, re-inspect the sealing at the cable ends and ensure that they are still properly sealed.  If they require re-sealing, add more sealant.

You will need a PulseBusta Euro and:

A plug to fit the trailer socket on your vehicle
A socket to fit the trailer plug on your trailer’s cable
Silicone sealant or liquid electrical tape
You will also need various hand tools – Side cutters, wire stripper, screwdrivers, needle nosed pliers.

PulseBusta Euro is warranted against defects in parts and manufacture for two years from purchase.  All care is taken during manufacture to seal each unit to the IP-68 rating however due to the severe operating conditions, in which it can be used.  It is not warranted against internal or external corrosion or any damage caused by liquid or dust ingress once it has been put into operation.  It is strongly recommended that you regularly check the assembly for possible liquid and dust entry points (nicks, cuts, abrasions, etc.) and seal any openings with silicone sealant to prevent the ingress of any liquid or dust as entry could eventually work its way along the inside of the cable and corrode the wires and electronics.  Please return PulseBusta Euro to LAB Electronics for damage assessment and repair, as there are no user serviceable parts inside.

PulseBusta Euro is designed for 12 volt direct current negative earth vehicles and trailers.  Each LED driver circuit can drive up to a maximum of 5 amps of current.

Do not connect any lamps (light bulbs) to the LED driver circuits on the trailer.

PulseBusta Euro conforms to E/ECE/324 – E/ECE/TRANS/505 regulations as it has two park light circuits and monitors the trailer’s turn signal LEDs and can therefore inform the driver if a fault is present by turning off the trailer telltale in the instrument cluster.  The onus is always on the driver to check that all of the vehicle and trailer lighting is functioning correctly.

A trailer lamp failure warning appears in the vehicle when the park and stop lights are used.

As the lamp check modules in most vehicles do not have the functionality to check a trailers park and stop LED circuits the internal load resistors inside both the PulseBusta Mk4 and Euro have been fitted but are not connected.  These load resistors develop quite a bit of heat and waste power, and as in most cases, they are not required, they have been left unconnected.

If you do receive a trailer lamp failure warning, you will have to carefully undo the cable gland tail and rubber seal, remove the two screws on the trailer end of the unit and access the three wires inside of the unit at that end.  If you feel that you cannot perform these operations, please locate someone that can.

On the trailer end of the unit undo the cable gland tail – Grip the 19mm (3/4in) body nut of the cable gland with a THIN spanner, so that it will not rotate on the end plate and break the silicone sealant seal.  Loosen the tail with another 19mm (3/4in) spanner.  Once loosened undo the tail completely by hand and slide it along the cable away from the body.

Fish out the three insulated wires with pre-stripped ends from inside the unit.  The White wire has an end cap fitted.  The Red and Black wires have plastic sleeves fitted over the bare wires at their ends.

The White wire is the earth wire.

The Black wire is for the park circuit load resistor(s) – one resistor for the Mk4 and two resistors for the Euro.

The Red wire is for the stop circuit load resistors – two resistors in all units.

If you have a lamp failure warning only on the trailers park circuit then connect the Black wire to the White wire.

If you have a lamp failure warning only on the trailers stop circuit then connect the Red wire to the White wire.

If you have a lamp failure warning on both the trailers park circuit and the stop circuit then connect all three wires together.

Un-screw the end cap from the White wire and remove the sleeve from the Red and/or Black wires, straighten the bared wire ends and twist the ends of the required wires together and screw the end cap from the White wire over them to terminate the required two or three wires you have twisted together.  If only two wires have been terminated leave the sleeve over the remaining unused wire, if all three wires have been terminated the plastic sleeves are no longer required, Please dispose thoughtfully. 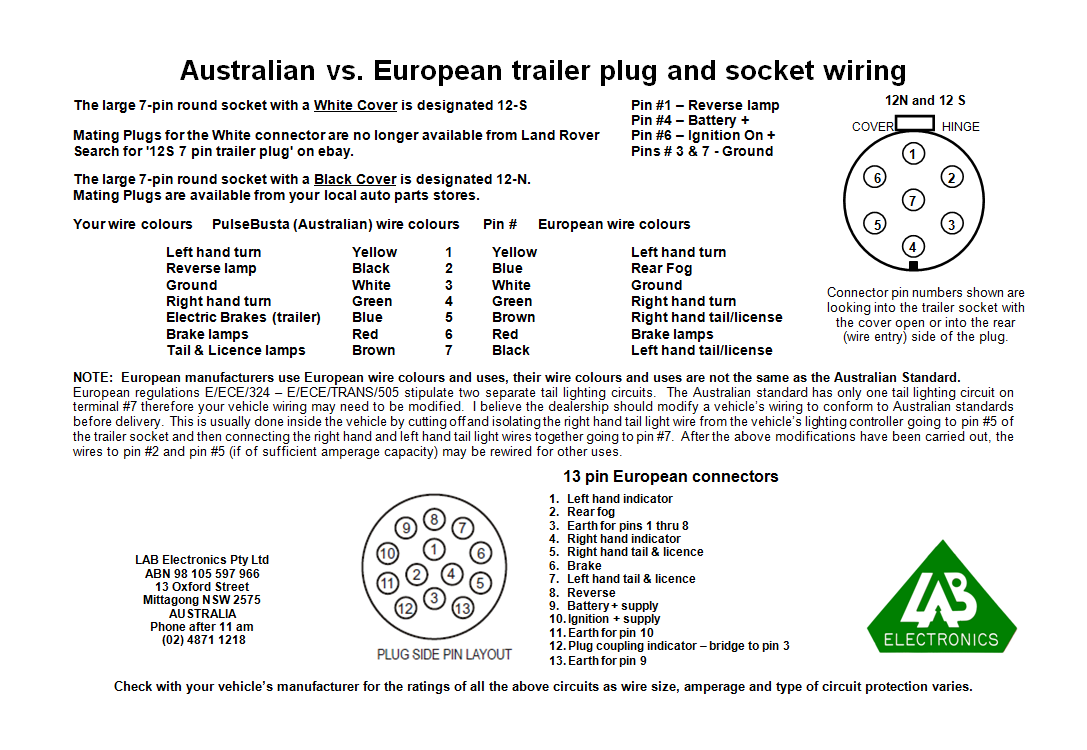